How can Nepali cooking go all electric?

Biomass, constituting 69% of Nepal’s primary energy consumption, is still the main cooking fuel for 63.6% of Nepali households, mostly in rural areas. Traditional biomass cookstoves are inefficient and produce a lot of smoke. These stoves, in poorly ventilated kitchens, expose women and children to harmful pollutants. In addition, women must often walk long distances to collect firewood, and cleaning a kitchen coated in the smoke residue is laborious. Likewise, bottled liquefied petroleum gas (LPG) usage is also rapidly increasing and is the main cooking fuel in 33.1% of Nepali households. Less than 0.5% of Nepali households use electricity for cooking.

Smoke-free Kitchens for all Nepalis

Nepal’s Constitution provides citizens the right to live in a clean and healthy environment. Therefore, the government has a target to have clean cooking in all Nepali households by 2030. Just from a clean energy perspective, the two most promising technological options for the government today are electricity and LPG. Given Nepal’s immense hydroelectric and solar potentials, the government wants to promote electric cooking. This is because LPG, in addition to contributing to carbon dioxide emissions, uses up Nepal’s scarce foreign currency reserves and makes Nepal highly dependent on fuel import, resulting in energy insecurity [2].

Therefore, how can the government be successful in meeting its goal of promoting electric cooking for all in Nepal? For this, the two main enablers will be an adequate and reliable electricity supply and a well-functioning supply chain for electric cooking appliances.

Nepal’s electricity distribution is dominated by the national electricity utility, Nepal Electricity Authority (NEA). NEA meets the peak demand of about 1,400 MW through its own generation, purchase of hydroelectricity from private producers, and import from India. The electricity is transmitted by high voltage transmission lines, distributed by medium voltage lines, then stepped down by distribution transformers for supply to households. Nepal usually has reduced in-country electricity generation during the dry season from mid-December to mid-March and has a peak demand during the evenings and mornings throughout the year, predominantly because of domestic loads.

The biggest barrier in promoting electric cooking in Nepal is the weak electricity distribution system, with overloaded conductors and transformers resulting in low voltages, and frequent breakdowns.  Therefore, NEA’s efforts will have to be in ensuring design, operation, and maintenance of the distribution system to reduce electricity downtime and increase the quality of supply. This will ensure a reliable and affordable supply of electricity to Nepali consumers to enable electric cooking.

Furthermore, NEA will need to use time-of-day and seasonal differential pricing [3] to reflect the daily and seasonal availability of electricity and supplement the potential deficit of electricity during the dry season through either import, development of storage projects, or promoting solar PV electricity generation to complement the hydropower generation during the dry season when the sunshine is the most. It will need to revamp the electricity transmission and more importantly the distribution system through the upgradation of conductors, and transformer capacities. The distribution will, then, need further innovations like smart metering and smart grid technology to increase electricity distribution reliability.

Electric cooking solutions consist of technologies utilized in a Nepali household for cooking such as electric induction stove, electric rice cooker, electric kettle, and more recently electric pressure cooker (electric cooking appliances or ECA). As with many consumer durables, the Nepali market being very small, products manufactured in Nepal cannot compete on quality, variety, and price because of economies of scale with those manufactured especially in our neighboring countries. Therefore, most firms will be suppliers of imported ECA, and any product innovation will be supplier-driven and possibly beyond the control of our national system of innovation.

As already mentioned, the first prerequisite for the widespread adoption of electric cooking in Nepal is an adequate, reliable, and affordable supply of electricity.

Even though Nepal has huge hydroelectric potential, most of the potential can only be harnessed through run-of-river plants. Developing seasonal storage projects have high social, environmental, and economic costs, and there are only a few that can realistically be developed. Therefore, the government needs to implement an electricity generation policy with a suitable mix of run-of-river and storage hydroelectric plants to be complemented by solar PV plants that can feed in electricity during the dry season and during the day, when solar resources are available. However, Nepal has become locked into a technological trajectory where the momentum of trying to just develop hydroelectric projects is locking out very promising renewable energy technologies like solar PV, wind, and biomass. Establishing a suitable electricity generation mix would stimulate innovations through competition between technologies so the electricity generated will be more reliable and cost-effective.

Another barrier to innovation in Nepal’s electricity sector is the monopoly of the vertically integrated NEA. This has resulted in an institutional lock-in, mainly through the strong influence of labor unions, political patronage, and rent-seeking. For this, expediting the unbundling of NEA into separate generation, transmission, and distribution companies, and further breaking up the resulting monolithic distribution company into seven provincial distribution companies would potentially foster further innovations related to the distribution of electricity.

The government will have to implement a differential electricity tariff system that sets the price of electricity based on supply and demand. Therefore, electricity in surplus would be priced lower than when it is in high demand. Such a tariff system for domestic consumers can be formulated to especially promote electric cooking. Concurrently, the government will need to carry out a massive advertisement campaign to inform the public about the economic and environmental benefits of cooking with electricity. This will help to stimulate switching to electric cooking. I would like to acknowledge that the government and its agencies with support from the private and non-governmental sectors have become various initiatives in this regard.

Given that Nepal does not have the socio-technical regime to compete with India or China, which enjoy huge economies of scale, on the manufacture of ECAs, innovation will be limited to strengthening the ECA supply chain in Nepal. Therefore, policies will need to address market failures in the supply chain. Firstly, the policy will be needed to address the positive externalities associated with the use of appliances using electricity from renewable sources like hydropower and solar to replace LPG or traditional fuels. Therefore, the government will need to reduce taxes and provide subsidies, at least initially to promote their use. Furthermore, the government can support financial institutions to provide soft loans to ECA vendors to provide appliances in easy installments. These facilities may also have to be extended in some form to electric induction cooker conducive cookware.

Policies to address asymmetrical information related to the quality of ECAs will also have to be addressed through a quality assurance mechanism that includes testing and certification. The government is currently in the process of establishing such a mechanism.

Finally, supporting the provision of timely and proper after-sales service will be another public policy area. Policies to support enterprises, especially in remote districts of Nepal, to provide after-sales service will be important. The government can also promote cooperative research whereby incentives are provided for collaboration between private sector firms and academic institutions to help diffuse technology to the remotest parts of the country.

The government has to really focus on sound policy formulation and implementation if it is to promote electric cooking over LPG cooking. The government, non-government and private sectors of the country have to closely collaborate and coordinate their actions to bring about an environment where all Nepali households are not only smoke-free, but utilize indigenously generated clean and renewable electricity for cooking, which will contribute significantly to Nepal’s goal of becoming a net zero-carbon country by 2050.

[1] This blog is based on an essay written by the author for his MSc in Energy Policy course.

[3] This would mean charging higher electricity prices during peak hours and also during the dry season when the generation is decreased. 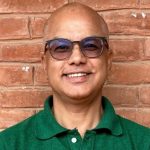 Suman Basnet is a renewable energy and management professional with over 33 years of experience in project design, assessment, situation analysis, research, capacity building, and facilitation of renewable energy projects in Nepal. Suman is a Senior Distinguished Fellow at Nepal Economic Forum and the Technical lead of Renewable Energy Center, an incubation program under Nepal Economic Forum that aims to be the premier platform for mainstreaming renewable energy issues by engaging multiple stakeholders to articulate discourse that will shape national-level energy policies.